Yes, this is going to be about a specific tea - but please bear with some rambling on the topic of ageing sheng before the brewing gets started.


Lately there has been a lot of discussion on different blogs and on teetalk.de about ageing sheng puer at home. I deeply respect all the planning, working hours and hardware invested into the Pumidor - but I can't imagine myself attempting to age sheng at home.

Well, I have shown you how my collection is stored, but that is meant purely for short term storage (say a year or two maximum). I don't intend to alter the tea or increase its maturity significantly. Why? No curiosity?
I've thought about it - but perhaps I am too scared of moldy tea. The risk of investing my narrow tea budget and several years on a project which might turn out an utter disaster? No thanks, not for me!

Many argue that ageing tea at home saves money, as aged tea is usually much more expensive than younger sheng. Well there are some exceptions to this rule, for instance today's Mengku 2003 from Bannacha.

First off two points in favour of this tea which please me even whithout brewing it:
(1) honesty about its material: plantation tea, no fancy (fake?) stories about ancient trees.
(2) honesty about its age: plain 9 years, though compared to an 8 year old cake I've tried it seems much more mature and other vendors might try to sell it as a 90s cake. 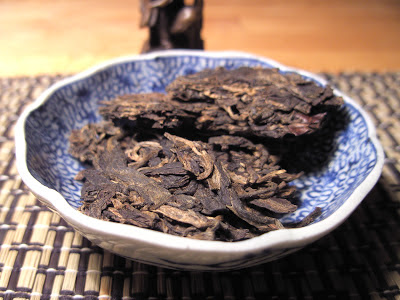 Let's get started as usual: dry leaves. In a bing of medium compression we find big leaves in different shades of brown - nothing green to be seen. Hardly any stalks in this blend, but many golden buds. Even the big leaves appear quite downy. When sniffing the dry leaves in the preheated pot, my nose catches some (not too wet) basement, antique furniture and loads of camphor! After rinsing, the camphor fragrance has decreased and an overall impression of freshly turned dark earth is predominant.

Today the first infusion didn't turn out as powerful as I remember it - might be because this is my first tasting of this tea with a claypot instead of a gaiwan. Or the leaves just need more time to open up? Anyway - the fragrance is just what I look for in an older sheng: imagine opening the drawer of an antique Chinese cabinet in which a pharmacist used to store his camphor ... that's it! 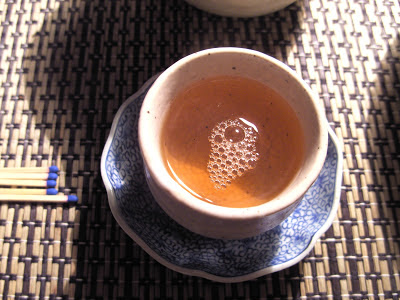 But I didn't have to wait too long: the second infusion gives me a fullbodied cup with some mushroom, licorice and wood flavours. Perhaps I'm imagining things, as the widely accepted lore is that chaqi / effect beyond caffein is something found in old tree material ... but this plantation tea does something to me. How to explain this feeling? Suffice to say I start humming reggae tunes. 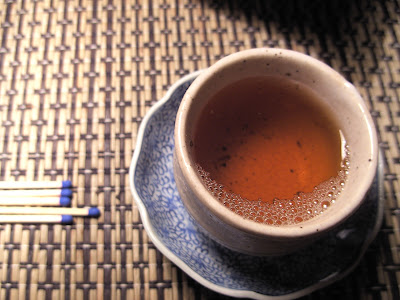 Third infusion adds some honey - both to flavour and to mouthfeel. The liquid seems to be more viscous, even after swallowing my mouth feels coated in camphor-honey.

Fourth and fifth infusion turn out pretty straightforward. I just checked with my notes on a first tasting of this tea in a gaiwan - back then this tea brewed up much more nuanced with many different layers of flavours and fragrances. Seems today's claypot is not the right match for this tea. Though some of the more fleeting flavours are muted, I still love this tea for its combination of persisting camphor and honey.
Okay, when the brew has cooled a little, I can also taste some mint, cedar wood and spice (cloves?).

Very often a tea makes me think of a specific song. Songs by great artists are like condensed emotions - and often the mood of a good tea matches those emotions. This tea is in my opinion perfectly matched by kettcar's song "im taxi weinen". No the lyrics don't apply at all, but the enduring and subdued energy underlying this slow song is exactly what I feel when drinking this aged sheng. 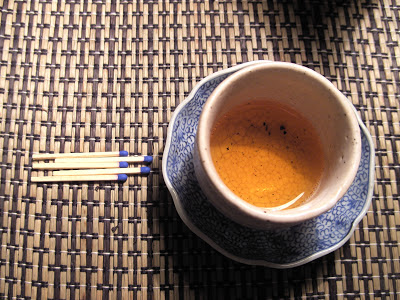 Back to the facts about this offering from Bannacha: the tea was stored in Guangzhou under conditions which enhanced its maturation. In an e-mail to William I guessed it was wet stored - but he corrected me, stating it was stored traditionally, under monitored conditions. This makes sense - compared to a drystored (and extremely tightly pressed) 2004 Jingmai I tried, the 2003 Mengku seems to be twice as old. Still I don't get the overwhelming impression of wet basement and old potatoes which are the epitomes of wet storage to me. Some of the basement smell is there, but mostly things happen in the range of antique furniture smells - which I like a lot! 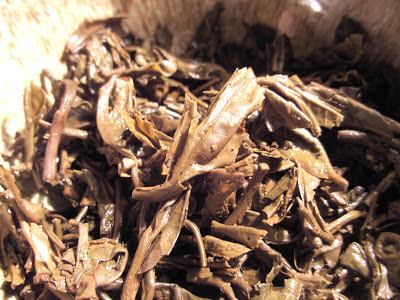 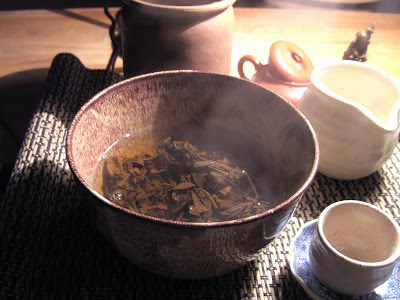 If I had money to burn, I might try to find out how different sheng from 2012 develop over the coming 10 years in a pumidor. But being a tea drinker aware of my budget restrictions, I just sit back, raise my cup of Mengku and drink to the health of William, who offers such underpriced gems on Bannacha.
(No, I am not doing paid advertising - I just hope William might reserve one bing for me. Who knows what this blog entry might do to the stock of Mengku 2003 - some of my few readers buying it by the tong?)