Here I sit again at my tea table for the last session with a precious sample William graciously sent to me some while ago. Seems it is from his private stash, as I can't find it in his shop: "2000 CNNP" is all to be found on the sample's label.
Which factory has made this tea? Where have the leaves been picked to make this bing? Unanswered questions which might be nagging me at some other time, just not today.


Today is an autumn day, the year is getting old and so my craving for aged tea has increased. Perhaps I should replace "aged" with "mature", as I once had a sample of a Xiaguan Tuocha from 2000, which had hardly any trace of age, while Chris' Douji Yiwu from 2007 felt much more mature. What I go for in a mature tea are storage charactistics (as a child I dreamed of becoming an archaeologist - so the smell of antiques in a basement holds some charms for me), mellowness on the stomach and ... (insert drum roll) ... replaying emotions from my past. Just like going through childhood photographs to bring back the face of your best friend at school, a mature tea can let me live through emotions or rather moods of my childhood or youth. I'll spare you for the moment - but will return to this point later in this post. 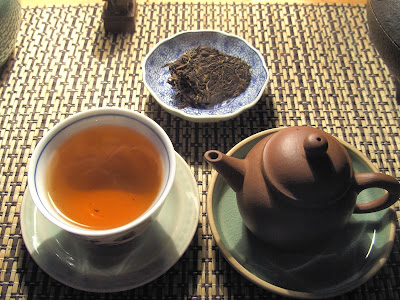 So here's this vaguely anonymus 2000 CNNP in my cup, on my tongue and on my mind. What does it taste like? Gosh, I was afraid you might ask me that question. The easy answer is: aged. Once again I sit with a tea which is far too emotional to be described by an analytical approach. When I exchanged a few lines with William on the aged tea samples he sent me, he was amazed by my evaluation - with me holding this tea much dearer than the 2003 Fengqing that he prefers. This disagreement is not about taste - rather about the strength of feeling, impression (some people might like to use the term chaqi, which I often avoid out of respect to the depth of meaning). What we have agreed upon: both teas' merits are mostly to be found in the feeling they give us, much more than in terms of flavour or taste. Though William might be about half my age, his puer expertise shines like a stage limelight compared to my dim candle. So I wonder: am I too untrained to detect the Fengqing's true grandeur?

Perhaps. Or perhaps the CNNP is just better suited to my water, equipment and brewing preferences. But honestly I think it is about the chords different teas strike. When I drink this 2000 CNNP, something inside of me resonates ... memories of my final months at highschool. To be more specific: of the quiet days we sparsely found between studying, exams and excessive parties (yes, even I was young back in the Eighties). Times when I was on the bus, riding home for the weekend for about an hour, listening endlessly to this masterpiece by New Model Army:
This blend of pensive tranquility, deep longing and intense energy ... exactly my cup of tea. Just like the 2000 CNNP. Some people might ask for a tea a bit more harmonious or perfectly smooth at the edges. But I don't want Donovan, I need New Model Army! So it is 2000 CNNP for me please.

Being at an age which does not promise a longer stretch of years ahead than what has passed already, I find myself looking back quite often. Some people get all sentimental and grieve for their youth gone by. But to quote Justin Sullivan (the voice of New Model Army): "Speaking personally, I think the older you get - the better it gets. Honestly!"
So true! I might have lost hair on my head to get lard on my hips, but I have discovered Puer tea and have glimpsed enough to know there are so many different teas to be tasted in the coming decades. The party nights of beer mixed with vermouth are dead and gone, but I'll continue enjoying songs by New Model Army like  "Bad Old World".
A version not found on Youtube but on their live album "Fuck Texas, Sing For Us" includes the above quote by Justin Sullivan. As long as I can't direct you to a shop to buy the 2000 CNNP, I highly recommand to get that album.

If you have tried this tea but feel reminded of the custard cake at your cousin's wedding - please, this once I'd ask you kindly to not write that in the comments. To me this tea is not sweet and creamy and I want it to stay this way ... but who am I to ask you. There is absolutely no objectivitea in tea.